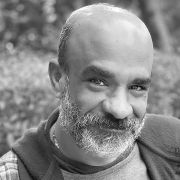 Youssef Rakha was born on 12 June 1976 in Cairo. He has a first class BA Hons in English and Philosophy (Hull University, UK, 1998) and was awarded the Larkin Prize for English and the Chris Ayers Prize for Philosophy. Since the early 1990s he has contributed many articles, book reviews and translations to the Arabic press, and is presently senior writer for the English-language Al-Ahram Weekly. In October 2009 he was selected as one of the 39 authors of the Beirut39 project.

The Book of the Sultan's Seal 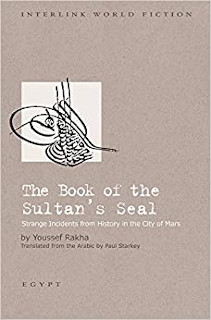 Translated from the Arabic by Paul Starkey.

Strange Incidents from history in the City of Mars. Youssef Rakha's extraordinary The Book of the Sultan's Seal was published less than two weeks after then Egyptian President Hosni Mubarak stepped down, following mass protests, in February 2011. It's hard to imagine a debut novel of greater urgency or more thrilling innovation.

Modeled on a medieval Arabic manuscript in the form of a letter addressed to the writer's friend, The Book of the Sultan's Seal is made up of nine chapters, each centered on a drive our hero, Mustafa Çorbacı, takes around greater Cairo in the spring of 2007. Together these create a portrait of Cairo, city of post-9/11 Islam. In a series of dreams and visions, Mustafa Çorbacı, encounters the spirit of the last Ottoman sultan and embarks on a mission the sultan assigns him. Çorbacı, trials shed light on the contemporary Arab Muslim's desperation for a sense of identity: Sultan's Seal is both a suspenseful, erotic, riotous novel and an examination of accounts of Muslim demise. The way to a renaissance, Çorbacı's journeys lead us to see, may have less to do with dogma and jihad than with love poetry, calligraphy, and the cultural diversity and richness within Islam.

With his first novel, Rakha has created a language truly all his own- an achievement that has earned international acclaim. This profoundly original work both retells canonical Arabic classics and offers a new version of »middle Arabic,« in which the formal meets the vernacular. Now finally in English, in Paul Starkey's masterful translation, The Book of the Sultan's Seal will astonish new readers around the world.