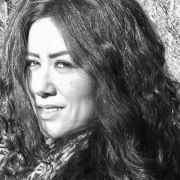 Jana Al-Hassan (also: Jana Fawaz Elhassan),born 1985, is an award-winning novelist and short story writer from Lebanon. She has worked as a journalist for leading newspapers and TV since 2008. Her first novel won the Simon Hayek Award and both her second novel Me, She and Other Women, and third novel were shortlisted for the International Prize of Arabic Fiction. In 2015, Jana Al-Hassan was listed among the BBC's 100women, a two-week season featuring inspiring women around the world. 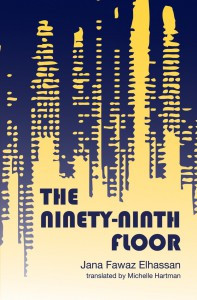 Translated from the Arabic by Michelle Hartmann.

At times as cold and hard-edged as the skyscrapers in its backdrop, The Ninety-Ninth Floor follows the struggles and triumphs of Majed as he makes it in Manhattan at the turn of the century, after surviving the devastating 1982 massacre at the Sabra and Shatila refugee camp. A Palestinian born and raised in Lebanon, Majed creates a new life for himself in the glittery world of New York City's computer games industry. But with all his success, Majed's past continues to haunt him. His relationship with Hilda, a Lebanese woman from a right-wing Christian family, exposes his innermost fears, worries, and dark secrets.

A multi-voiced narration, The Ninety-Ninth Floor conveys the brutality that war leaves on the people who experience it. It is also a love story that asks questions about the ability of passion to overcome hatred and difference.